Ivy learned this song at Tami's for their daycare Christmas program and I caught it on tape and had to share!

I took Ivy and Ada in for their well-child checkups today and it turns out they weren't so well. When the doctor looked in Ivy's ear, she looked at me and said "Has she been complaining about this ear at all?"..then she looked in Ada's throat and said.."Oh wow, you've got some troopers here if they haven't been complaining." So Ivy has an ear infection and she thought Ada had a sinus infection and sore throat, so they're both on Amoxicillin now. Other than that, they are doing fine, growing well, hitting the milestones. Ivy is 36 lbs and 40.75" tall (57%/66%); Ada is 31.4 lbs and 34" tall (91%/53%). 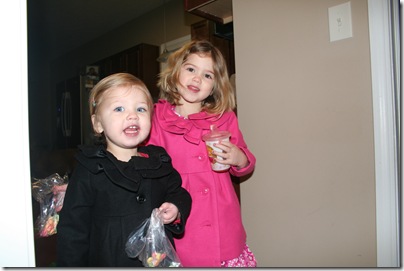 Just a quick post about the girls' birthday party we had this weekend. We invited our families over for some sloppy joes (thanks, mom) cake and ice cream. It was a gorgeous day so we were able to spend some time playing outside as well. The girls had a princess themed party and gave away some fake jewelry and tiaras to the cousins. Here are a couple pics of my little princesses.

We got some complimentary tickets to Vala's pumpkin patch this year from Eric's uncle Tim (which were greatly appreciated as the tickets were like $12 each!) so we took the girls there today. The weather was beautiful, sunny and a little chilly, but perfect for pumpkin patchin'. We ran into Eric's cousin Corey and his family which was nuts because there must've been several thousand people there. We ate lunch with them and then headed off on our own to the hay rack ride. Then we went around and pet some animals, checked out the pumpkin shooter, and grabbed a funnel cake and some other goodies. Here are a few pictures from the day...

We went to Omaha yesterday for my cousin Beth's wedding and had a blast! The venue was such a cool spot, downtown, outdoor wedding...then inside for the reception which was equally as cool. The food, drinks and music were all awesome and we danced all night. Eric even took the girls back to the hotel so I could stay and pack in some more cousin time. Congrats to Beth and Brian, wishing you the best!

We went to Omaha last night to see Brandi Carlile show and it was amazing. She played at the Whiskey Roadhouse inside the Horseshoe Casino, which was a great small venue to see someone with such a huge voice. Eric and I met up with Valerie and her friend Erin around 7:30 before the opener (Katie Herzig) started. She was pretty good, just wasn't all that exciting. When Brandi came on, Valerie and I headed up to the stage where we stood/jumped/danced for her set. It was pretty much the best concert I've been to. I was able to take a few great videos, even though it was supposed to be a video-free venue...whoops  ;)

I spent most of this weekend in Omaha with some of my favorite peeps; mom, sister, aunts and cousins. My cousin, Beth, is getting married on October 1st, so we had her wedding shower at the Upstream Brewing Company in the Old Market. Then it was off to the hotel downtown for some bachelorette fun and games. We hitched a ride with the hotel shuttle to the casino because they had a band and a dance floor. Those of you who know me well, know I don't dance. That being said, I danced all night. It was hilarious and so much fun. I can't wait for the wedding, I always have so much fun at our family get togethers. Here are a couple pics from the night...

I know this post might get certain people all riled up, but it's not my intention. I just have to rant about bicyclists for a little bit. I'm not gonna lie, I've always had a slight (read: major) problem with bikers that ride along streets as if they were in a car. The issue is not that I don't want to share the road with them, or what have you. The issue is the safety of the bikers, as well as people driving. How many times have you been stuck on a two lane street waiting to pass a biker because they are in the middle of the road? If your answer is "not many"...you're lucky, or maybe I'm unlucky.

Something else sparked this post idea though, and that would be bike lanes! Ok, so if bikers must use the same streets as cars, I guess bike lanes are a pretty good idea. That way, you have a better idea of where they are at all times and they aren't in your way...as much. So there is a bike lane right where I enter/exit my parking garage downtown, and every time I pull out of there, bikers are in the lane that I want to turn into...NOT the one that says BIKE LANE. I don't get it. It makes me think that they don't necessarily want something designated for them to use for biking so much as they feel that they deserve to use every inch of road that a car uses...just to make a statement. Any cyclists out there care to fill me in?

We spent the past few days in Okoboji for an end of summer vacation. We left on Saturday (the 14th) and got back tonight around 6pm; it was a very relaxing and fun couple of days. We went with my parents and my sister's family this time around. Ivy and Ada had a blast swimming and playing on the beach with their cousins. Eric and I had fun on the jetski that we decided to bring up this time. It ran like a champ and was definitely worth hauling up there. Here are a few pictures of the week..

I've been meaning to blog about all of the projects we've been working on at our house. I finally took the camera outside and took pictures yesterday. For starters, Eric put stairs off our deck so we could access the backyard without walking all the way around the front of the house. I'm not sure why the builder wouldn't have just done that, any way to save a buck I suppose. After that, he got to work on a new patio right off the deck steps. We had the concrete stained brown and then stamped to look like pavers rather than a plain concrete slab. I think it turned out awesome and hopefully someday we'll actually get to enjoy it without sweating. It was also nice to finally get the hot tub out from under the deck, I'm sure the neighbors were sick of looking at that eyesore. At the same time, we had some concrete edging put down. There's some in the backyard around the house, some in front of the house, and a berm in the front yard for future foliage. We planted a couple things, but the dead of summer isn't exactly the best time to pick out plants and trees, so we'll wait until fall to pick out the rest. Next we've been wanting a fence to keep our critters in the backyard and it's almost done now. It took the fence company like 2 months to finally "get the materials in". Oh, we also finally bought some blinds for the windows...not that I didn't love those temporary paper shades. But I don't think the manufacturer meant for them to be used for ten days, let alone ten months! Here are some pictures for your enjoyment...