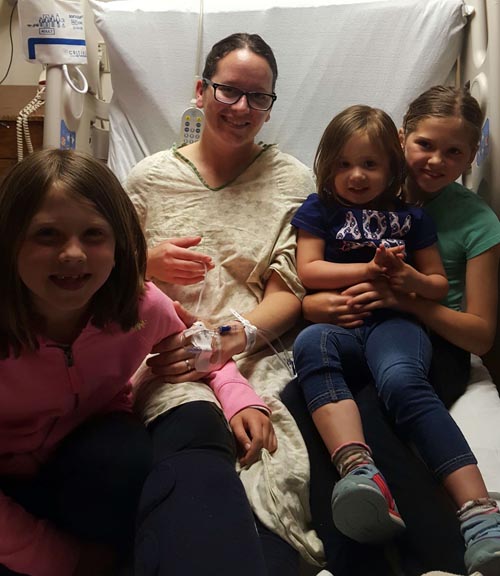 I woke up on the morning of Friday the 13th of May with a slightly aching right thumb. It felt like I'd knocked it on something the day before and maybe bruised it a little. I had been cleaning and organizing boxes in the basement and assumed that's where it happened. Well, as the day progressed, the pain got worse and it became red and swollen. When Eric came home from work around 5:30, I told him I thought I might need to go to urgent care because it was a more throbbing pain than earlier. I went in and the doc thought it was some sort of infection, although there were no visible sores so it wasn't obvious. She put me on an oral antibiotic (Keflex) and said to watch for systemic symptoms like fever, nausea, etc. I went to bed that night and was absolutely miserable. I was in so much pain and just felt like crap in general. I got up around 1 am to take some ibuprofen and tried to get to sleep. That didn't seem to help so at 3:30 I just got up and thought it might help to ice my thumb a little. I checked my temp and it was 102.7 (a couple hours after 600mg of ibuprofen). My sister asked earlier in the night if I had any red streaking near the thumb because I mentioned my right arm pit being sore. Well, lo and behold, there were now red streaks from my thumb to my arm pit and I commenced freaking out. I called my doctor's office and the on call doctor said I should head to the emergency room because the infection was spreading faster than the antibiotic could handle. I woke Eric up and called my dad to come over and watch the kids. Eric took me to the ER and they started me on IV antibiotics. I assumed we'd be there a few hours to get the infection sorted out and I'd be on my way. One of the ER docs came in and glanced at my arm and winced, "Eeeesh, I hope we get that under control". Um, thanks for the vote of confidence! The nurse said they would be sending the hand surgeon in as well. I couldn't believe how overkill it seemed, but after looking at what could've happened, I realize why they were so worried.

They diagnosed it as flexor tenosynovitis and lymphangitis (lymph wall inflammation). Basically, the tendon around my thumb got infected and since there isn't much room for expansion in the hand, they freak out a little and tend to perform surgery right away. I spent all day Saturday on the antibiotics and it took care of the lymphangitis but did nothing for the swelling and redness in my thumb. So Sunday morning, I went in for surgery. I have never had general anaesthesia, but they put me completely under for it.  That was so strange to wake up 30 minutes later with a huge bandage on my hand and no clue what just happened. He made a zig-zag slice down the entire thumb and left it pretty well open to close on its own. There were two stitches in the corners of the zigzags. I couldn't even look at my thumb during the first dressing change at the hospital, but Eric astutely described it as a bratwurst that had been sliced open.

When I was up in the room after the surgery, I started to feel heart palpitations fairly regularly, so they had me wear a heart monitor that night. It didn't show any irregularities, but it was extremely unnerving to feel my heart jumping all over the place. I was discharged (finally!) on Monday afternoon and was told to watch for signs of infection again. The first night home I was absolutely sure that I was going to die. I was terrified and I couldn't talk myself out of feeling that way, it was awful. I pretty much lay awake in bed all night that night. When I went to my internist for the hospital follow-up, I asked her about the palpitations and how they didn't see anything wrong with my heart and she thought they were related to anxiety. I've never been an anxious person or a real worrier, but I feel like I can empathize a little now and it's not something I would wish on anyone. Doc thought I should look into meditation and other relaxation techniques such as going to my "quiet room". HAHAHAHAHA. She also gave me a prescription for propranolol to take as needed. She uses it to treat palpitations and stage fright. Open mic night, here I come!

It's August now and I'm still dealing with the palpitations. I don't feel like I'm specifically worried about anything, so I don't understand it. We were in Okoboji for almost a week in July, and I didn't have them the whole time we were there. That makes me feel better knowing that it's most likely a psychological problem as opposed to something physical, although a physical problem might be easier to deal with. The kids go back to school on the 16th so we'll see if anything changes then. It's been a good summer, they've been pretty good, it's just hard to keep them all occupied all the time.

On the plus side, I've hit my out of pocket maximum of $6,000 this year, so the rest of my medical expenses for 2016 are free! Of course, this would happen the first year that Eric's company starts doing the high deductible health plans. Oh well, it's not like I would've refused treatment or anything so sometimes you just have to deal with it.

Here are some photos of the thumb if you're interested. Warning: some are nasty!

View the embedded image gallery online at:
https://bredenkamps.com/23-2016/241-thumb-down#sigProIda6fdcb0b71
There are no comments posted here yet