All the Single Toddlers...

Well I've mentioned before that Ada loves music and dancing, but I thought I'd post this video to illustrate it. By the way, I in no way advocate this song's message it just has a good beat...and kids like to dance to it.

Eric and I went to see Damien Jurado tonight at the Bourbon Theatre in Lincoln. Openers were Ember Schrag, Manny Coon, and Kay Kay and his Weathered Underground. It was a good show all around, but made me sleeeeeeeeepy. Here's a video of the song 'Arkansas' from Damien's newest album.

We made the trek down to Bella Vista to celebrate my grandpa Ivo's 85th birthday this weekend. We met the family in Kansas City on Friday night and hung out at the hotel and went swimming. Then we headed to Arkansas on Saturday morning for a fun-filled couple of days. When Ivy saw the lake behind grandpa's house, her chin hit the floor. She couldn't get in the water fast enough. We spent the bulk of both days in the lake swimming and went on couple boat rides. Ada spent about an hour in the lake splashing around so it was fun for her too. Here's a video of grandpa blowing out his candles, and some pictures from the weekend.

I Heart My Sister

I had to dedicate a post to my sisty ugler in honor of her moving to Lincoln this weekend. Some of you may remember my toast at her wedding in which I blubbered through tears about how I've always followed her around and wanted to be just like her. I went to college in Kearney because she went there...didn't even look anywhere else. Well the tables have turned it seems, since she followed me to Lincoln...kidding, I know that's not the reason...but I'm going with it. Glad to have you back Dawn (et al)! 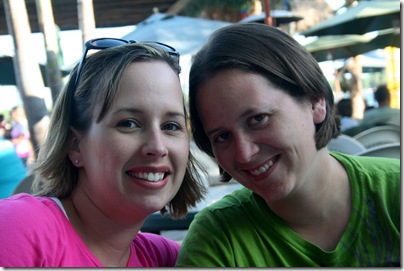 Just wanted to post a little something about a couple shows I saw this month. Eric and I went to see Lincolnite Joshua James at Knickerbockers downtown on May 4th. He was a great performer and had a great opening group. On May 9th, I went to see Kaki King in Omaha with my friend Valerie. She's the only female on Rolling Stone's "guitar gods" list and she didn't disappoint. She played a great set and was amazing to see live. Here are a couple little videos from the shows if you're interested...

We took Ada to the emergency room this morning because she was having a hard time breathing when she woke up. When we got there they gave her a breathing treatment and a steroid shot to help open up her airway. We stayed for a couple hours to make sure she was doing better and then we were able to go home. She was SUCH a lover for those two hours, she just laid on me for a while and then I set her on the bed and she slept the entire time we were there. I was thinking about how difficult it was going to be to keep an 18 month old occupied for that long in a hospital room. I was semi-annoyed because I had taken her to LinCare yesterday because she was wheezing and the doctor said it was nothing to be concerned about. Here are some adorable pics of Ada in her little gown... 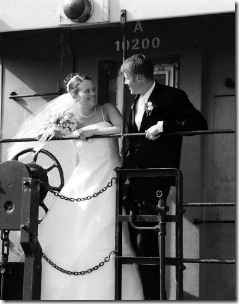 Eric and I are celebrating seven years of wedded bliss today! My parents offered to watch the girls on Saturday night so we could go out. We started out at the Horseshoe casino, had dinner and lost enough money to be annoying. Then went out to a nice bar in Omaha and enjoyed some delicious nachos and a couple beers. We spent the night there too so it was kind of a fun get-away. Tonight my parents had us over for a roast and all the fixings, so it was nice not to have to worry about that tonight. Happy Anniversary Eric!

Try to watch this video without smiling...I dare you...go on try it... 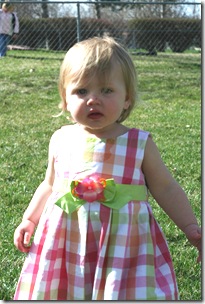 I took Ada back to the ENT for her post surgery checkup today. He said everything looked great, there was no fluid or infection in either ear, so that was awesome to hear. I can't believe how much of a difference the tubes have made. She's sleeping all night until about 7am every day, and we've quickly started taking a full night's sleep for granted...it's so awesome. Ada is 17 months old now and has a few more words up her sleeve. I've gotten her to say something like Dora, Diego, and Ni Hao (my apologies to the non-Nick Jr folks out there). She's started babbling more, and it sounds like she's got her own language, and it's adorable! She's also working on the top two molars, so she's been drooling like crazy. Isn't she pretty?

We had a great time celebrating Easter with the girls this year. We spent most of Saturday at my parent's house with them, Dawn's family, and uncle Bart (we missed uncle Craig!). The kids had fun playing outside with silly string and they did an egg hunt too. Then we headed to Kearney on Saturday night so we could spend Easter Sunday with Eric's family. The Easter bunny must have gotten the memo that we wouldn't be home because he brought the girls' baskets to grandma Becky's house. Ivy got the Care Bear's movie that I used to LOVE when I was little...ok, maybe I still love it. Ada got a coloring book and some new (washable) crayons and they both got a bunch of candy. They got their pretty Easter dresses on and were so great during the church service. We spent a lot of time outside today hunting for eggs and playing on the swing set. The girls had a blast with their cousins all weekend and here are a few cute pictures to prove it  :)